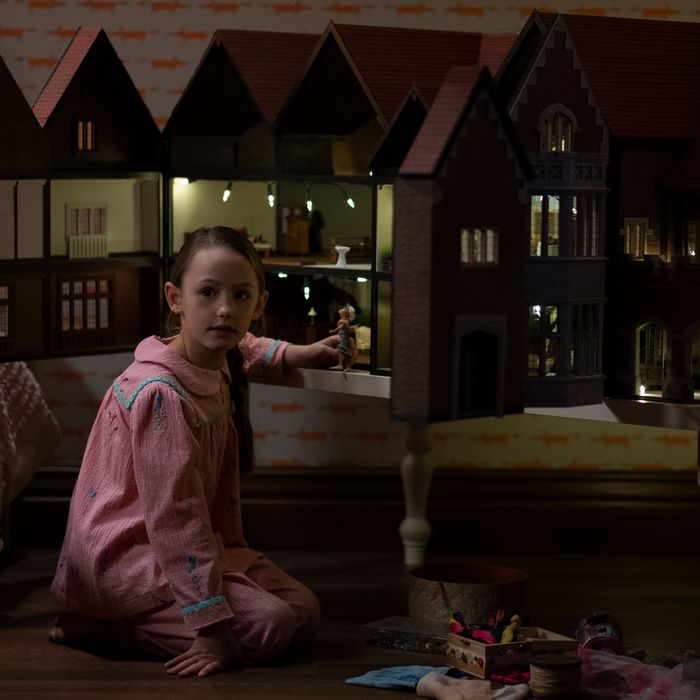 The Haunting of Bly Manor

Almost everything we’ve seen in The Haunting of Bly Manor is a story within a story. Apart from the opening moments of the season — when Carla Gugino decided to entertain a bunch of wedding guests with what has turned out to be a very long and complicated ghost story — this entire plot is being filtered through the perspective of a narrator we really don’t know anything about. Apart from the handful of lines Carla Gugino speaks in voiceover each episode, it’s fair to question why we needed that framing story at all (though I suspect we’ll get some clarity in that in the season finale).

But you can’t say the same for this episode, which leans heavily on Gugino’s narration to deliver a story that is Bly Manor’s most traditionally gothic hour. Everything about this episode signifies that it’s something different than we’ve seen before, from the near-total absence of Bly Manor’s main cast to the audacious decision to photograph this story, which is set in the mid-17th century, in black and white.

What we get, instead, is an origin story for the horrors contained in Bly Manor. The episode centers on sisters Viola (Kate Siegel) and Perdita (Katie Parker), who are left alone when their father passes away. This wouldn’t be a problem if they were men — but since property can’t be inherited by women, Bly Manor itself is at risk. The clever, headstrong Viola comes up with the best compromise permitted by the standards of the time: She marries Arthur Lloyd, a distant cousin, who can move in and become the (nominal) head of the family.

At its core, Bly Manor is a series of love stories, and it’s in that spirit that Viola’s marriage to Arthur — which could easily have been a cold and pragmatic business arrangement — actually becomes a fairly loving one. They have a daughter, Isabel, and Perdita continues to live in Bly alongside them, forming a warm and supportive family unit.

Tragedy strikes when Viola begins coughing up blood, which results in a tuberculosis diagnosis. A doctor insists she has months to live at most, but dutifully begins a grueling medical regimen that includes isolation, leeches, and bloodletting. Nothing helps, and the family prepares to say goodbye to Viola forever.

But on her deathbed, Viola makes a choice that will continue to haunt Bly Manor centuries later: She simply refuses to die. As her husband and the vicar beg her to take the last rites and go gentle into that good night, suggesting that it’s all part of God’s plan, her sister Perdita intervenes: “God should know better. She is as He made her. If she says she will not go, she will not.”

And so Viola doesn’t go — an incredible, almost supernatural act of willpower with far-reaching consequences for everyone, including Perdita. Living for years after tuberculosis was predicted to claim her life, Viola becomes a shell of herself: Sick, isolated, cruel, and pathologically jealous of her healthy sister’s relationship with Arthur.

To be fair, that last one turns out to be warranted. After serving as Viola’s round-the-clock nursemaid — and suffering under what is clearly regular physical abuse from her sister — Perdita loses all the warmth and affection she once had for Viola, and begins to imagine how much better life might be without her in it. When she finally suffocates Viola one night, the narrator tells us, Perdita tries to convince herself it was mercy before privately admitting that she had another word in her mind the whole time: Enough.

Perdita marries her former brother-in-law — apparently keeping it in the family is a Bly Manor tradition — and they settle into a relatively happy and comfortable life. But when Arthur makes a few bad business deals, all of the family’s wealth (including Bly Manor itself) suddenly ends up at risk. There is, at least theoretically, a Hail Mary in reserve for this exact situation: A massive locked trunk full of valuable old clothes and jewelry that belonged to Viola. But Arthur vowed to Viola that he would save the trunk to give to Isabel when she came of age, and no matter how dire their financial situation becomes, he refuses to let Perdita open it.

So Perdita takes matters into her own hands. She steals the keys to the trunk, sneaks up to the attic in the middle of the night, and opens it. And as she greedily eyeballs the dresses, the sleeves suddenly wrap around her throat and strangle her to death. Arthur discovers her corpse in the morning, and resolves to take Isabel away from Bly Manor once and for all.

As it turns out, even dying couldn’t stop Viola from rejecting her own death, so she became Bly Manor’s first ghost instead. Like the ghosts we’ve met in the show’s main narrative, Viola spends much of her time “tucked away” — in this case, in a private “room” that exists within the trunk — waiting for the moment when her grown daughter will open the locks. And when this fairytale ending is thwarted by Perdita, she decides to kill her instead.

This is, understandably, enough to make Arthur believe the trunk is cursed, and he tosses it into the lake before he leads Isabel away from Bly Manor. As the years pass, Viola gradually becomes The Lady From the Lake. Even as she forgets who she is or what she wants — and even as her own face disappears — she emerges from the lake to repeat the steps she took in life (and leave some very familiar-looking wet footprints behind, of course). If anyone gets in the way, she kills them, dooming them to a similarly deathless fate on the grounds of Bly Manor.

But before Bly Manor zooms back to the main story in its closing moments — where The Lady From the Lake still has Dani in her cold grip — it’s worth pausing for a moment to think about this strange, interesting, deeply tragic revelation about the ghosts in this old house. Traditionally, ghosts in stories like this one have some kind of unfinished business. That’s clearly what Viola believed as she waited, all those years, for her daughter to open the trunk — a mother-daughter reunion that would, at last, bring her joy and peace.

But Bly Manor has a darker moral in mind: If you refuse to accept your own death, you’ll discover that immortality has a very high price. Centuries later, Viola still says she will not go, and so she is still here. But looking at this blank-faced parody of a human being, mindlessly clinging to the life she had without any memory of what made it worthwhile… maybe eternal rest isn’t so bad after all.

Bumps in the night:

• Hidden Ghosts: As far as I can tell, this episode doesn’t contain any, because there are no ghosts until Viola’s death. But we do get some explanations for the hidden ghosts we’ve seen throughout the season. The plague doctor you can spot as early as the premiere was killed by Viola after Bly Manor was converted into a quarantine hospital for plague victims. The moaning woman who Flora shushed during hide and seek was Perdita herself, trapped in the attic. And the little boy befriended by Flora was originally drowned by Viola, whose fuzzy grip on reality made her mistake him for her own child to bring back to the lake with her.

• This entire episode is a loose adaptation of the legitimately creepy Henry James short story “The Romance of Certain Old Clothes,” which you can read here. Numerous lines from Carla Gugino’s voiceover narration are also pulled directly from the text.

• Okay, we’re at the end of the season, so it’s crazy theory time. Here’s the dart I’m gonna toss at the board: Everyone at Bly Manor is dead. The events of the series are actually just the ghosts — who are all “tucked away” — reliving the circumstances that led to their deaths over and over again. This would also mean that the main story isn’t actually set in 1987; it’s set in 2007, in a Bly Manor that’s abandoned and empty except for the ghosts of those who died 20 years ago. Based on the ending of Hill House, I suspect Mike Flanagan might ultimately be too sentimental to embrace an ending this grim — but I dunno, I think it’d be creepy and cool.

• Arthur and Isabel just kind of disappear from the story, huh? Maybe they’re the ancestors of Carla Gugino, or one of the other wedding guests in the frame narrative?

• As Viola wanders the hall at night, she sings “O Willow Waly,” which is the song you’ve heard Flora singing by the lake all season, and from the music box in the forbidden wing of Bly Manor. It’s also featured heavily in The Innocents, Mike Flanagan’s favorite film adaptation of The Turn of the Screw.

• Viola and Perdita’s names are each pulled from Shakespeare (Twelfth Night and The Winter’s Tale, respectively). The original story makes it clear that the girls’ father was a devoted Shakespeare enthusiast.

• Katie Parker, who plays Perdita, also appeared in The Haunting of Hill House (as Poppy Hill).

• The envelope containing the keys to the trunk reads “teneo,” which is Latin for “to hold.”

• One thing I’m not entirely clear on: Why doesn’t Viola attack Miles or Flora? They’ve at least figured out that they need to stay out of her way — but how? Given what she did to the little boy, you’d think Viola would at least mistake Flora for her daughter instead of just dragging Dani away at the end of episode 7.

Keep up with all the drama of your favorite shows!


By submitting your email, you agree to our Terms and Privacy Notice and to receive email correspondence from us.