I think this gadget is clever and useful. Expect some guests to use this. I don’t know if it can damage the door frame.

I wish the advertising didn’t promote the idea that Airbnbs aren’t safe. 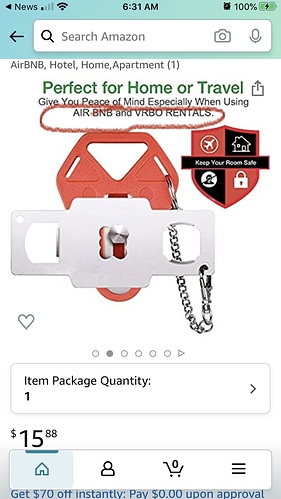 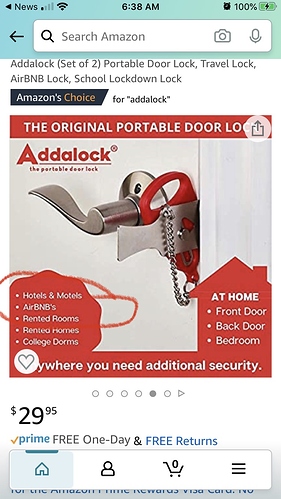 Air should sue them for defamation.

ir should sue them for defamation.

I agree. What a poor message. You can tell a lot by the fact that what’s written is “AirBNB’s” – with an apostrophe.

Plus, Airbnb is a company, the rentals themselves aren’t AirBNBs.

I hate it when people refer to my cabin as an AirBnb, I correct them usually. AirBnb is just one of my booking platforms…

I find it a bit paranoid to get one of those locks, but if someone does not feel safe more power to them.

We have one for use at home for complicated reasons I won’t go into. I think we’ve used it once. It’s a faff to get to work (I still can’t) and it took ‘imself ages. So I don’t recommend them at all.

The ad doesn’t bother me at all. We’ve talked a lot about guests having locking doors. For some reason there are a number of hosts who take offense at the concept that a guest would want to be protected from a host. I’ve already disclosed here that I’ve mindlessly gone into the guest room twice while guests were booked. The first time the guests were out. I ran in there to look out the front window to see what a suspicious noise was. This was prior to my having exterior cameras to use for that purpose. The second time the guest had quietly checked in. He didn’t have a car and it was earlyish, about 4 pm. (Check in window opens at 3 pm). I opened the door to do one last check and there he sat on the bed. I was mortified.

Anyone who thinks guests shouldn’t have the option to lock their host out needs to get walked in on and see how they feel.

@KKC
If I had a shared home rental, as the host I would want one too. A locked indoor bath/bedroom knob is easily unlocked from the outside.

Anyone who thinks guests shouldn’t have the option to lock their host out needs to get walked in on and see how they feel.

Which is exactly one of the complicated reasons why we have one at home.

Luckily though, I don’t think I’ve ever walked in on guests. I once nearly did when the guests went out in their car about twenty minutes before check out time. I thought they were just leaving early. As soon as I saw that their stuff was still in the apartment though, I was straight out of there.

I agree, @KKC. We put digital locks on our two guest bedrooms. We assign the same code that the guest uses for the front door.

I’d say that about a quarter or a third of our guests have locked their bedroom doors. Others don’t bother. But I think being able to say that we have those locks is a feature some guests look for or expect.

And because a couple of guests have accidentally opened our master bedroom door, we have the same digital lock on our door, coded for just us.

A host who also travels as a guest posted a photo of one similar to this (it looked like a much better design, so probably doesn’t take faffing around with, as jaquo found) on another forum and said she always travels with one in case she finds herself in a situation where she feels it might be advisable. As a responsible, older, homeowner herself, I doubt they damage the door or frame, otherwise she would have mentioned that.

I certainly understand a guest wanting to feel that no one can walk in on them when in their room and think they should always have an inside lock option.

The thing that would concern me about a lock like that, as opposed to a bathroom-style lock, is that if the person inside had an accident and couldn’t make it to the door to unlock it, or lost consciousness so that they weren’t responding to someone asking if they are all right in there after hearing a crashing sound, that the door would have to be forced or broken to get in and help them.

When I traveled …sigh… I carrIED a very simple door wedge. It works with very simple tech!