A Detailed Look at Cannabis Sales in California, Oregon, Arizona, Colorado and Nevada

Data provided by BDSA indicates that cannabis sales continued their robust expansion in 5 Western states at a slightly slower pace, with the exception of California. During August, the twelfth month after the onset of the vaping crisis and the sixth month of the pandemic impacting the market, sales across the five markets totaled $838.1 million, down 1% from July, which followed sequential increases of 12% in June, 2% in May and 14% in April. March had spiked to $666.0 million from $579.9 million in February as customers purchased cannabis ahead of store closures and concerns about limitations on access. With the near-term effects of the pandemic now behind us, it’s clear that cannabis demand is surging, even in relatively mature markets, like Oregon and Colorado. Nevada continued to recover as tourism slowly returns, with sales growing 2%. California, which posted 15% sequential growth in July, extended its momentum with a 3% increase, while Colorado contracted 6%. Arizona and Oregon sales pulled back 2%, but both of these states had meteoric growth from a year ago.

Overall sales growth from a year ago among the five Western markets ranged from 23% in Colorado to as high as 45% in Arizona. Nevada has been impacted by the tourist slowdown but still grew 34% from a year ago. Oregon continued its strong growth, rising 32%, while the largest market, California, grew 26%. Note that the comparisons to a year ago should be easier beginning in September given that the sales began to be impacted negatively by the vaping crisis a year ago.

Here is a closer look at each market, as detailed by BDSA:

Sales of flower accounted for 48 percent of overall revenue for the month with $44 million in sales, decreasing two percent from July. Pre-rolled Joints, which are tracked as a separate category, accounted for just under four percent of revenue, with $3.6 million in sales. Compared to the previous August, Flower sales increased by 42 percent and Pre-rolled Joints increased by 89 percent. 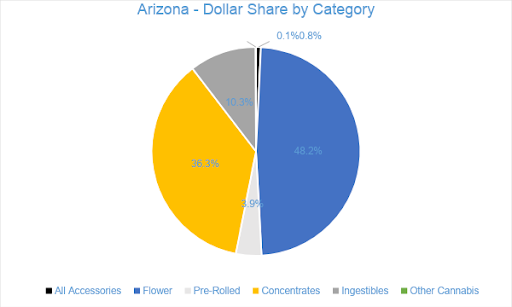 Concentrate sales accounted for more than 36 percent of overall revenues, with sales totaling $33.5 million in August, declining three percent from the trailing month. Vape products, the largest segment of the Concentrates category, generated $20.7 million in sales, accounting for 62 percent of the Arizona Concentrates market and 23 percent of sales across all categories. Compared to August 2019, sales of Dabbable Concentrates grew by 73 percent, while Vape sales grew by 39 percent.

The Ingestibles category accounted for more than ten percent of sales in August with $9.5 million in sales. Compared to August 2019 and July 2020, sales in the category grew by 40 percent and decreased by five percent, respectively. In August, the $8.9 million in sales from Edibles generated nearly 94 percent of Ingestibles sales overall, while Sublinguals made up the remaining six percent. Compared to the previous August, Edibles sales increased by 52 percent and Sublingual sales decreased by 35 percent.

BDSA sales reporting for the month of August reflects the state market of 702 licensed dispensary locations and 311 delivery operators.

In August 2020, cannabis sales for licensed retailers and delivery services reached $343.6 million, growing three percent from the trailing month and 26 percent compared to August 2019. Year to date, sales in California have reached $2.3 billion, more than a 15 percent increase compared to the same period in 2019.

Sales from Flower generated $143.7 million in August 2020, accounting for nearly 42 percent of overall sales. Compared to the trailing month and August 2019, Flower sales grew by six percent and 58 percent, respectively. Pre-rolled Joints, which are tracked as a separate category, accounted for more than 11 percent of overall August sales at $37.9 million, growing nearly seven percent from the trailing month.

Concentrates were the second-largest revenue category in August 2020, reaching $102.3 million in sales and accounting for nearly 30 percent of total sales. Compared to the trailing month and August 2019, sales increased by one percent and by four percent, respectively. The $76.8 million in Vape sales accounted for over 75 percent of the Concentrates category and 22 percent of the month’s overall sales revenue.

The $62.9 million in Concentrate sales during August 2020 represented a seven percent increase from the previous year and a six percent decline from the trailing month. The category accounted for over 29 percent of revenue for the month. Vape products, the largest segment in the Concentrates category, reached $31.3 million in August sales, decreasing six percent compared to July and five percent from the previous August, respectively. The Vape category accounted almost 50 percent of Concentrates revenue and 15 percent of overall sales for the month.

In August 2020, sales from Ingestibles generated $33 million, a 23 percent increase from August 2019. Compared to the trailing month, sales in the category declined by six percent. Edibles generated $31.1 million in monthly sales revenue, contributing over 94 percent to category sales and 14 percent of total revenue for the month. Sublinguals made up the remaining six percent of Ingestibles sales, totaling $1.9 million for the month.

Flower sales accounted for over 55 percent of overall August 2020 sales. Sales in the category reached $46.2 million for the month, growing five percent from July. Pre-rolled Joints, tracked separately from Flower, accounted for nearly 11 percent of August sales with $9 million in revenue. Compared to August 2019, Flower and Pre-rolled Joints sales have increased by 78 percent and by one percent, respectively.

Concentrate sales in August reached $18.6 million, accounting for more than 22 percent of overall sales for the month. Compared to the previous August, category sales increased by 13 percent. Compared to the trailing month, category sales increased by two percent. Vape products, the largest segment in the Concentrates category, generated $13.4 million for the month, contributing nearly 72 percent to Concentrates revenue and almost 16 percent to total monthly sales.

Sales in the Ingestibles category accounted for ten percent of all revenues, totaling $8.5 million in August sales and declining by about five percent from the previous year. Compared to July, category sales decreased by seven percent. Edibles made up 90 percent of the Ingestibles category, reaching $7.6 million in August revenue, and Sublingual sales contributed the remaining ten percent.

In August 2020, Cannabis sales in Oregon’s medical and adult-use dispensaries reached a combined $104.2 million. Compared to the trailing month, sales in the Oregon market declined by about two percent, and compared to August 2019, sales grew by 32 percent overall. Year-to-date sales in Oregon have reached $724.5 million, growing by 38 percent compared to the same period in 2019.

Sales of Flower generated $48.7 million in August 2020, accounting for 47 percent of overall revenues. Compared to the trailing month, Flower sales decreased by three percent, and compared to August 2019, sales increased by 46 percent. Pre-rolled Joints, which are tracked as a separate category, accounted for ten percent of overall revenues, with $10.2 million in sales.

For readers looking for a deeper look at cannabis markets across these five states and more, including segmentation by additional product categories, brand and item detail, longer history, and segmentation by product attributes, learn how the BDSA GreenEdge Platform can provide you with unlimited access to the most accurate and actionable data and analysis.

The NCV Newswire by New Cannabis Ventures aims to curate high quality content and information about leading cannabis companies to help our readers filter out the noise and to stay on top of the most important cannabis business news. The NCV Newswire is hand-curated by an editor and not automated in anyway. Have a confidential news tip? Get in touch.

This Big Cannabis Market Has Kicked Into Growth Mode