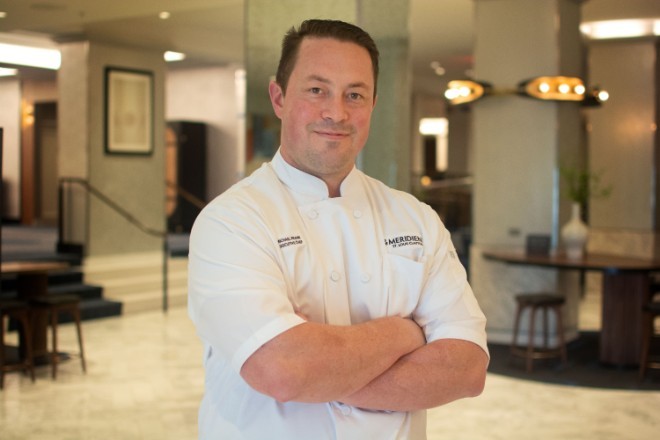 Growing up, Michael Frank was always in awe of the artistic prowess of his dad and brother. Both naturally crafty and artistic, he’d watch them create impressive works; his brother, in particular, impressed with his ability to make everything from wooden puppets to short movies. It made Frank wonder why he didn’t get the creative gene — until he discovered cooking.

“I would always look at them and wonder how they came up with everything, because it didn’t come naturally to me,” Frank says. “But then, I got older and got my first kitchen job, where I realized I could be artistic through food. I was good at it, had a knack for creating aesthetically pleasing plates. I just ran with it.”

Now an accomplished chef whose resume includes several high-profile restaurants around the country, Frank is using his culinary skills to bring to life the dining component of the new Le Méridien St. Louis Clayton hotel (7730 Bonhomme Avenue, Clayton; 314-863-0400). Though it’s a large undertaking, Frank feels up to the challenge thanks to the varied experiences he’s had throughout his career, beginning with his first cooking gig at Denali National Park in Alaska.

“A week after high school, my buddy and I drove out to Yellowstone because we heard we could work there for the summer,” Frank recalls. “After that, I would go to school during the winter and work at national parks during the summer. I got offered a cooking job at Denali, and at first, I didn’t want to take it, because I didn’t want to be in the kitchen. I figured I’d take it anyway and transfer as soon as I could, but I ended up falling in love with it.”

For Frank, his experience on the line at Denali called to mind his passion for sports. Growing up, he loved to play different sports competitively and enjoyed being on a team. Being in the kitchen felt familiar, and he found himself returning to the park for three years in a row so he could soak up all he could from this newfound path.

The more he worked in the kitchen, the more he realized it was something he wanted to pursue. He’d get that opportunity when his chef at Denali told him about an opportunity with a restaurant group in Jackson Hole, Wyoming. His chef wanted him to go there with him to help open a new restaurant, and he accepted.

It turned out to be a game-changer.

“The group just did things the right way,” says Frank. “They always said that the secret to success is pretty simple: If you do things right and put out a good product and good customer service, that’s the recipe. Don’t overthink it. Cook things and do it the right way. That really stuck with me.”

From Jackson Hole, Frank moved on to a resort property in Colorado and eventually Scottsdale, Arizona, which was another eye-opening experience for him. There, at the five-diamond resort, he learned about fine-dining and got the chance to work with acclaimed chefs from around the world, who would cycle in and out of the property’s restaurants. Eventually, he worked his way up to sous chef at one, and stayed there for four years until moving on to a revered eatery in Santa Fe, New Mexico.

“It was a great experience for me,” Frank says. “The chef there did things the right way and always said to me, ‘We’re not going anywhere.’ When a new restaurant would pop up, he’d say that it would be there for three years, but we were timeless. That was a great lesson.”

After Santa Fe, Frank moved back to his hometown of St. Louis, where he worked at Farmhaus for three and a half years. Though he admits the restaurant’s fierce commitment to farm-to-table and doing things the right way was often a pain, he learned how important it is for the end product. It also helped him learn how to be resourceful and understand how to let food speak for itself.

From Farmhaus, Frank helped open the food and beverage outlets at the Angad Arts Hotel, including Grand Tavern by David Burke, where he worked all the way up until the COVID-19 outbreak shuttered Grand Center. At a crossroads, he learned of the Le Méridian opportunity and reached out to see what he could offer. The next thing he knew, he was hired on as the hotel’s executive chef.

The hotel group has given Frank creative freedom to shape its restaurant into what he wants it to be, a challenge he feels ready for. Mediterranean focused with a heavy emphasis on French cuisine, he describes what he’s put together as understated elegance — simple, delicious, beautifully presented food made with the best ingredients he can find.

That he’s been able to have such an opportunity to bring beauty to the table in the midst of a pandemic is not lost on Frank. In fact, he feels that the added layer of challenge has only made him, and the restaurant, better.

“What doesn’t kill you makes you stronger,” Frank says. “It’s the truth. This has been an invaluable learning experience for me. I’ve been surrounded by smart people, and it’s this incubation tank of ideas. I’m going in with the mindset that it’s going to make me better.”

Frank took a break from the kitchen to share his thoughts on the lessons you can learn from the wilderness, missing baseball and what gives him hope in the midst of these challenging times.

What is one thing people don’t know about you that you wish they did?
When I was in my early twenties, I got lost in the mountains of Montana overnight in a T-shirt and shorts. I had a Camelbak with no water, a map and no food. I made a fire out of pine shrubs to keep warm, and I used goat trails to find my way out. Nature will teach you a lot about resourcefulness and personal perseverance, which has been helpful in these unprecedented times.

Which ingredient is most representative of your personality?
Parmesan cheese: salty and slightly nutty, with a lot of depth.

What is one thing you make sure you do every day to maintain some sense of normalcy?
I take care of my garden and try to get outside every day. I’ve been able to check off quite a few house projects since March. One thing that was very abnormal was being off for most of the summer, but not being able to watch Cardinals baseball. I’m a huge Cardinals fan so now that baseball is back and I’ve returned to work, that in itself makes some days feel more normal.

What have you been stress-eating / drinking lately?
I’ve been so busy with the hotel and restaurant opening that I haven’t had as much time to cook. So I currently have Thai, Indian and pizza on rotation. It’s not good. I also drink about a dozen grapefruit sparkling waters a day when I’m not having coffee.

You have to be quarantined with three people. Who would you pick?
I’ll go with the two people I spent quarantine with — my girlfriend and my eleven-year-old German Shepherd, Arlo. My girlfriend is a teacher, so quarantine was also a summer break together. If I could choose anyone else, dead or living, it would be Stevie Wonder. He’s my guy. I listened to a lot of Stevie by the fire pit last spring.

What would be your last meal on earth?
All the king crab legs and hot butter.

What do you think the biggest change to the hospitality industry will be once people are allowed to return to normal activity levels?
While being a part of opening a hotel with large banquet and catering capabilities, one change that I think about often is how serving large groups of people will look in the future. Something we talk about daily is evaluating how to feed guests in a safe manner, but in a way they are also able to enjoy and celebrate their meals and events.

What is one thing that gives you hope during this crisis?
Seeing the creativity and perseverance of chefs and restaurateurs as they change their concepts and fit the needs of diners has really given me hope. Also, it has been amazing to watch the dedication of Silverwest Hotels, LLC., the ownership group at Le Méridien St. Louis Clayton, while opening this beautiful hotel and restaurant in the midst of a pandemic.

We are always hungry for tips and feedback. Email the author at [email protected]