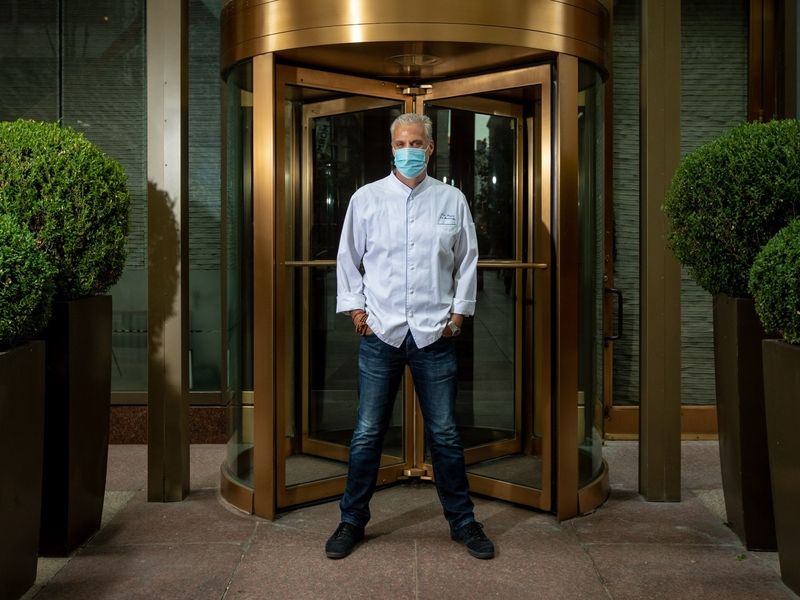 On Sept. 30, Le Bernardin, one of the world’s seminal seafood restaurants, will welcome guests for the first time since March.

This is New York’s first Michelin three-star restaurant to announce it is reopening for indoor dining. The Midtown Manhattan spot has stayed closed throughout the pandemic, without an option for takeout or outdoor dining.

Chef-owner Eric Ripert began implementing a plan immediately following the announcement that city restaurants could finally reopen at 25% capacity. “We had to figure out how to create an experience that was safe but also very Le Bernardin,” he says in an exclusive phone interview. “And in terms of cost, it had to make sense.”

The time to reopen is now, he continues: “It’s a risk, sure. But it will be a risk in December, in January. We want to bring life back to our neighborhood in Midtown, back to our industry.”

The cost of enhancing the restaurant to meet safety precautions has been substantial, says Ripert. “We’re talking hundreds of thousands of dollars.” Daniel Humm, chef-owner of Eleven Madison Park, another of the city’s three-star restaurants, anticipated that it would take “millions of dollars” to reopen. (Humm is reopening his dining room, but hasn’t specified when.) Le Bernardin received close to $2 million in PPP (Paycheck Protection Program) funding. “It has been very helpful,” says Ripert.

One of Ripert’s biggest investments has been the installation of the Needlepoint BiPolar Ionization system, a heating, ventilation, and air-conditioning system (HVAC) in the dining room and kitchen. The technology, installed by Scientific Fire Prevention, eliminates more than 99% of any Covid-19 particles in the air within 30 minutes; hospitals such as John Hopkins and major airports use it. “Right away, we say yes when it was proposed to us. The system was just installed in the United Nations,” according to Ripert.

The restaurant is also following now-standard safety precautions, including six-foot distancing and partitions between tables. Guests will arrive at the main entrance, where the lounge has been turned into a “welcoming center” for temperature checks and to allow for distance between incoming parties. The restaurant’s exit is the former entrance to the private dining room, allowing a flow through the dining area.

Ripert is one of the city’s few fine-dining chefs who have announced a reopening. Per Se, another of the city’s top spots, says through a spokesperson that it is “exploring an early October reopening.” Daniel Boulud will reopen his eponymous restaurant Daniel on Sept. 30—albeit, he says, with a more “fun, bistro-style, post-summer feeling.”

In the best-case scenario, Le Bernardin will break even with a 25% full dining room, according to the chef. “If we do a small loss, we are okay with that.”

But like several New York restaurateurs, he is unsure how long he will continue service if indoor dining isn’t expanded to 50% around Nov. 1, as New York Governor Andrew Cuomo has indicated he might do. “It’s okay for now; we have a small team. But not for a very long time.”

The restaurant will open with about 50 staff members. Before the pandemic, Le Bernardin had about 180. (Ripert is vice chairman of the hunger relief group City Harvest; like many chefs around the city, he activated a handful of staff to prepare meals for World Central Kitchen for people in need.)

Ripert says the list of offerings, about 60% of what he served before the pandemic, will include signature dishes such as thinly layered yellowfin tuna with foie gras and baguette, pan-roasted monkfish with chorizo emulsion, and salmon pot au feu with truffles.

“We will have caviar and truffles but not on every dish,” he says, adding that he’ll also create new dishes for the fall season.

Sourcing the pristine ingredients that Le Bernardin is known for has been challenging during the pandemic. Ripert is currently researching the quality of scallops from Maine and figuring out what fish can travel from Tokyo. “There is, for sure, inflation in the price of the food we buy, from seafood to olive oil,” says the chef. “And cleaning supplies—forget it. Even toilet paper: As everyone knows, those prices have gone up, too.”