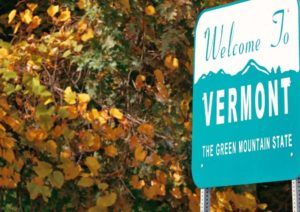 Vermont’s new recreational cannabis program is projected to generate roughly $250 million in annual sales by the middle of the decade, but homegrown companies might find themselves pitted against larger out-of-state businesses.

Three medical cannabis businesses – including multistate operators Curaleaf and iAnthus Capital Holdings – are poised to take advantage of a five-month head start in sales in the spring of 2022 backed by potentially large cultivation and processing facilities.

The new market comes after Vermont on Oct. 7 became the 11th state to legalize adult-use sales and the third to do so in New England.

It’s unclear to what extent the Vermont adult-use industry will become local in flavor in a sparsely populated state known for its locally made products: Think maple syrup, cheddar cheese and, more recently, smokable hemp flower.

But smaller, homegrown companies could stand to benefit given that the new law allows businesses to operate only one marijuana retail store.

Also, the number of business licenses statewide isn’t limited by law, although Vermont’s 255 municipalities will decide whether to allow adult-use retailers to set up shop. Localities can impose license caps, too.

But, Subin said, the law is designed to “try to deter larger cannabis companies coming from out West.”

The Vermont Growers Association – which is composed mainly of legacy marijuana farmers and is trying to protect the interests of Vermont growers and small businesses – opposed the legislation establishing the new program.

But, he said, the group believes the law is setting up a “a battle between out-of-state ownership with unlimited canopy versus small producers.” The result, Silva said, will be an “inequitable market.”

Here are key business aspects to the new law:

The study, published in August before the final details of the bill were hammered out, was based on the program launching in 2021 with existing medical cannabis operators.

Andrew Livingston, Vicente Sederberg’s director of economics and research and the study’s author, said the sales projections are likely to be reached later, so it might be 2025 or 2026 before Vermont generates $250 million in sales a year.

St. Louis-based investment firm Stifel has a more bullish view, projecting in a recent report that the Vermont recreational market could generate retail sales of $800 million to $1 billion a year.

But that assumes all municipalities opt in, which isn’t expected to happen. Stifel also emphasizes that existing MMJ operators will have a “first-mover advantage.”

Vermont has a population of only 600,000. But Stifel notes that the state has 13 million visitors a year, thanks to its skiing, hiking and autumn colors.

Those visitors spend a cumulative $2.8 billion on lodging, food, goods and services.

Livingston said he took existing tourism into account in his projections, including the likely percentage of visitors who are cannabis users.

But he noted that tourists spend only a small amount of time in the state, so most of the marijuana sales will involve residents.

Subin of Vermont Cannabis Solutions reports strong interest in the adult-use market from hemp growers looking to diversify, local businesses and out-of-state, lower-level industry executives who want to start an operation in Vermont.

“The thought is that the Northeast is the new frontier right now,” Subin said. “Companies are looking for locations, putting together teams. The barrier to entry (in Vermont) is low. Real estate prices are cheap.”

Subin doesn’t view the five-month head start for existing MMJ operators as a major advantage, but he said it might allow them to choose some of the most lucrative retail locations.

Tracy Brady, vice president of corporate communications for Curaleaf, confirmed in an email to Marijuana Business Daily that the company has two MMJ licenses in Vermont and plans to enter the adult-use market.

MJBizDaily received no response from iAnthus concerning the status of the Grassroots Vermont license and whether it’s affected by the New York company’s financial restructuring.

Silva said the Vermont Growers Association believes the program should be under the state of Vermont Agency of Agriculture, Food & Markets as is the state’s hemp program.

Instead, he noted, a three-member Cannabis Control Board will regulate the industry, which the Growers Association is concerned could be susceptible to political influence.

Silva also complained that cultivators are being defined as commercial rather than agricultural enterprises, which he said will make it difficult and potentially expensive for existing Vermont farmers to enter the market.

Gov. Phil Scott declined to sign the legislation, but he did allow it to become law.

In a letter to the secretary of the Senate, Scott expressed concern about existing MMJ operators getting a head start and access to vertically integrated licenses.

“This creates an inequitable playing field both for our smaller minority- and women-owned business applicants, and other small Vermont growers and entrepreneurs.”

Jeff Smith can be reached at [email protected]