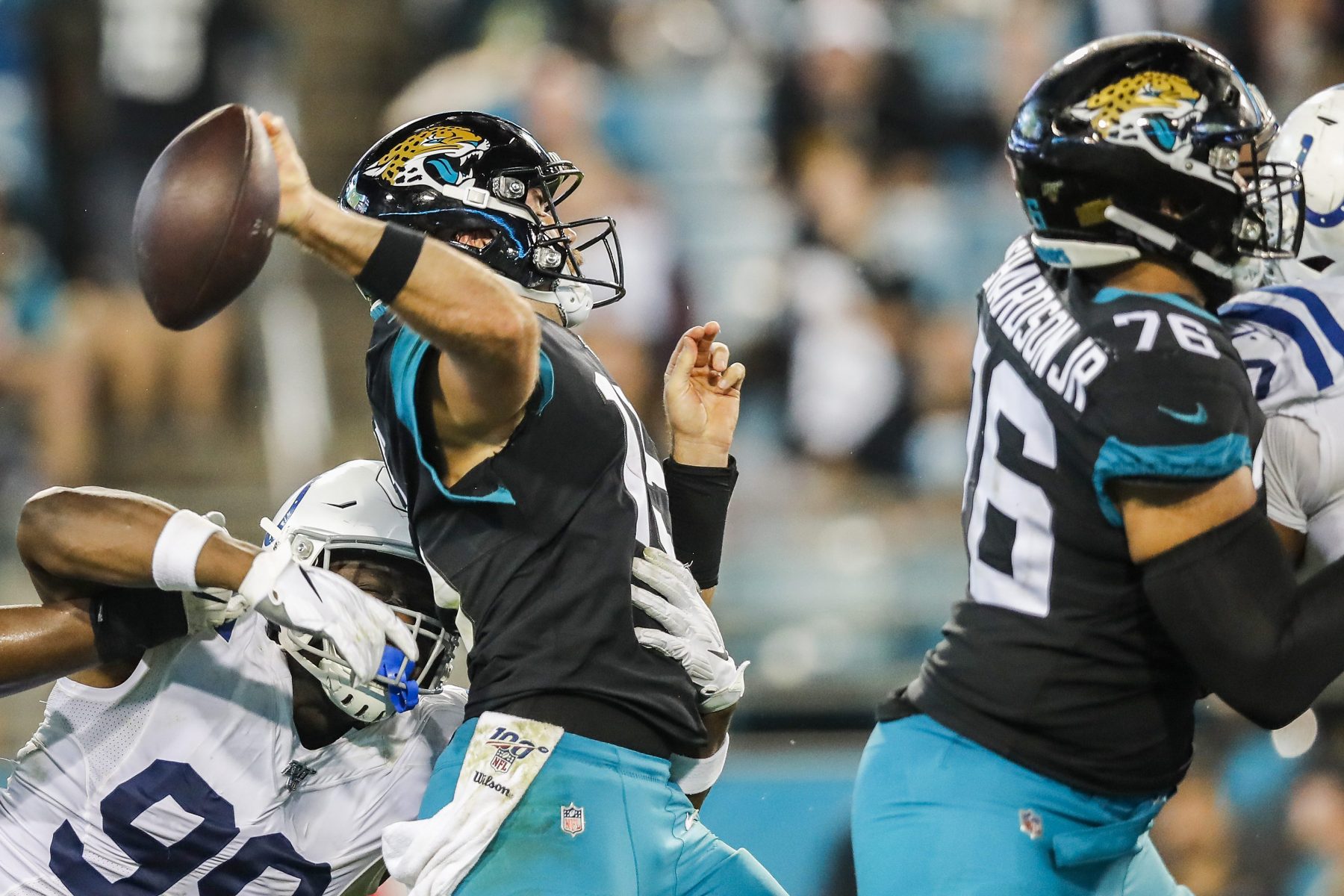 Justin Houston of the Colts forces a fumble by Gardner Minshew of the Jaguars. (James Gilbert/Getty)

Over the next six weeks or so, we’ll be preparing for the kickoff of the 2020 NFL season on September 10 by attempting to answer the most important question facing all 32 of the league’s franchises in order of finish from worst to first. Today’s team, the Jaguars.

In January of 2018, the Jacksonville Jaguars traveled to New England to take on the Patriots in the AFC Championship Game with a trip to the Super Bowl on the line.

Through three quarters, the Jacksonville defense — which featured six Pro Bowl selections and the league’s top-rated secondary as well as a stellar pass rush — held Tom Brady and the Patriots in check, and the Jaguars led 20-10 in the fourth quarter after making an early field goal in the game’s final frame. Trailing by two scores and stuck at their own 25-yard line with 10:49 remaining on the clock, New England faced a third-and-18 against a Jacksonville defense that ranked fifth in the league in preventing third-down conversions of 16 yards or longer.

Unfortunately for the Jags, a unit that had stopped opponents short of first downs 17 times in 18 tries during the regular season on third-down situations of 16 yards or longer came up short, allowing Brady to take a five-step drop and complete a pass to Danny Amendola across the middle of the field for a 21-yard gain that resulted in a first down.

New England scored four plays later and was able to ride the momentum of the unlikely completion to a 24-20 win and a Super Bowl berth.

Since losing that game to close out a year where the team went 10-6 to win the AFC South under first-year head coach Doug Marrone, the Jaguars have been a complete disappointment, finishing 5-11 and 6-10 in the last two years, good for last place in the division both times.

To be fair, a disappointment is generally what the Jaguars have been: prior to the 2017 season, the last time the team had a winning record was in 2007 under Jack Del Rio. Still, it is jarring to see how far the team has fallen since the playoff loss to New England. Just how bad is it? Vegas has installed Jacksonville’s projected over/under win total at an NFL-worst 4.5. And looking at the talent on the team’s roster, it’s hard not to feel like Vegas probably has it right.

Of the six Pro Bowlers who took the field for the Jaguars against the Patriots (cornerback Jalen Ramsey, cornerback A. J. Bouye, defensive end Calais Campbell, defensive end Yannick Ngakoue, defensive tackle Malik Jackson and linebacker Telvin Smith), only Ngakoue remains. The team’s quarterback that year, Blake Bortles, signed a three-year, $54 million contract following the championship game loss but was released a year later. After spending last season backing up Jared Goff in Los Angeles, he’s now out of the NFL. Bortles’s replacement, Nick Foles, signed an $88 million deal with the Jaguars prior to the 2019 season, but after fracturing his left clavicle in the first quarter of the first game of the season and only appearing in four games for Jacksonville, he was traded to the Bears in 2020.

Now, after agreeing to pay Bortles and Foles more than $140 million (not all of it guaranteed) over the course of consecutive offseasons, the Jaguars have wound up with an 11-21 record and a quarterback depth chart that consists of 2019 sixth-round pick Gardner Minshew II, 2013 third-rounder Mike Glennon, 2020 sixth-rounder Jake Luton and 2017 fourth-rounder Joshua Dobbs. As the saying goes, P.U.

Minshew, who started 12 games for Jacksonville last season and threw for 3,271 yards and 21 touchdowns with six interceptions while leading the Jaguars to a 6-6 record, was serviceable as a rookie and will start for the team again in 2020, but it seems very unlikely he will be a good long-term option, especially now that teams have had a full offseason to look at him on tape.

The team does still have talented running back Leonard Fournette, and has made an effort to rebuild its defense by investing three first-round picks over the past two years in DE Josh Allen (7th overall in 2019), CB CJ Henderson (9th overall in 2020) and OLB K’Lavon Chaisson (20th overall in 2020). Still, the fact of the matter is that Jacksonville does not project to be anything other than a bottom-of-the-barrel NFL team in 2020.