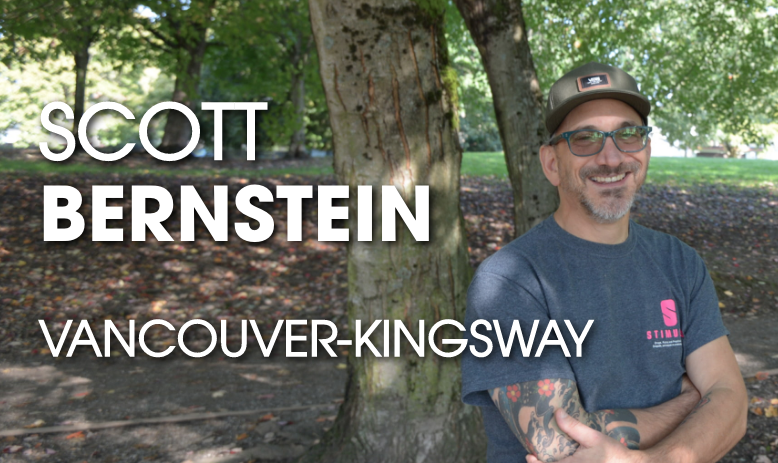 CANNABIS CULTURE – British Columbia is holding a snap election. In my riding of Vancouver-Kingsway, I finally have a chance to vote for a real progressive drug peace activist, who is saying all the right stuff about drug policy. I asked Scott Bernstein of the BC Green Party some of the questions that are on my mind. See if you notice any difference between his answers and the non-answers you usually get from a typical politician.

David Malmo-Levine: Mr. Bernstein, can you tell the readers of Cannabis Culture some of the experience you have had being a drug peace and harm reduction activist with groups such as the Canadian Drug Policy Coalition, the Open Society Foundations and Pivot Legal Society?

Candidate Scott Bernstein: I began my career in drug policy and harm reduction 13 years ago when, while still a law student at UBC, I became involved in the Insite legal case. I ended up working on that case through all levels of court over the next four years. It introduced me to many of my harm reduction heroes, including Dean Wilson, Liz Evans and Donald MacPherson, and taught me the importance of compassion and understanding about all sorts of drug use and evidence in driving drug policy. As a new lawyer, I ended up landing a job with Pivot Legal Society, and revived their health and drug policy advocacy. Among the things I did there during my three years was to launch a legal case against the city of Abbotsford opposing their anti-harm reduction bylaw and a case against the federal government for access to prescription heroin. I also wrote a report about the legal impact of mandatory minimum sentences on people who use drugs, which was being put forward by the Harper government at the time. After Pivot, I worked for Open Society Foundation in the Global Drug Policy Program. My portfolio was focused on helping to activate (mostly through funding, convening and strategic planning) a global movement of drug policy reformers to respond to the UN General Assembly Special Session (UNGASS) on drugs that took place in 2016. I also helped to build a nascent drug policy movement in Africa. Most recently, I am director of policy for the Canadian Drug Policy Coalition based at SFU. We’re a national coalition of 55 organizations across Canada advocating for reforms based on public health, human rights and social inclusion. I lead our work on decriminalization, legal regulation of all drugs, safe supply, and international advocacy.

Bernstein: I am well aware of the potential for decriminalization to mean punishment of drug use/users by another name. We see examples of this approach in several US states and in Portugal, which has become a model that some are suggesting we in Canada emulate. Recently, the Canadian Association of Chiefs of Police articulated a model of decriminalization that would substitute one level of police intervention (criminalization) for another (diversion). I feel that Canadians as a whole aren’t comfortable with “big brother” medical surveillance models such as Portugal, and our “made in Canada” approach needs to be much different. My feeling is that when you are at a point of recognizing the harms that criminalization, enforcement, and incarceration have in our society – including creating stigma, difficulties in employment and travel, economic hardship to individuals, wasted taxpayer costs, and real barriers to accessing services – it seems logical that the required action is for police to simply “stand down.” We don’t need to have other mechanisms in place before reforming law and/or policy that directs police to stand down on drug possession and other low-level drug offences, and we should not wait for that to happen. I am in favour of us having a look at the cost-savings of reducing criminal justice engagement (i.e. police, courts, etc.) and deciding where this money is best spent. We may choose to ramp up treatment or harm reduction services, but decriminalization shouldn’t be held hostage to that. Fines, forced treatment, and drug courts are horrible ideas that merely substitute one level of punishment for another and have no place in a Canadian model of decriminalization.

I have been working with other advocates to push the federal and BC government to take action to decriminalize urgently. I was involved in this letter and have been in conversations with government officials at the federal and provincial level,. I am currently leading a national working group of advocates aiming to coordinate our efforts for change. We are developing tools to elevate the conversation nationally and working to fill in the policy gaps around what decriminalization should look like. I also co-invented a collaborative, role-playing board game designed to teach the general public about choices with decriminalization and the resulting outcomes of going one way or another.

DML: You are running in the upcoming provincial election in British Columbia on October 24th, 2020, as a member of the BC Green Party. Can you please explain the power dynamics of the Green/NDP coalition that currently determines policy on a provincial level, if the Greens have been able to affect any policies as a result of the coalition (especially drug policy) and what aims you are hoping to achieve if you increase your electoral gains this time around?

Bernstein: BC was recognized as having one of the most effective provincial governments over the last 3.5 years, largely as a result of the Confidence and Supply Agreement the NDP made with the Greens. The BC Green representatives have been able to shape provincial policy to improve it in areas of the environment, social services, and the economy. Calling a snap election during a pandemic was a craven and unthoughtful move by the NDP, particularly when the government was in actuality operating very effectively. It also violated the agreement the NDP had made to not do so. Drug policy has not always been the strong suit of the BC Greens, and that is something I have been working – as a new member of the party and candidate – to remedy. To that end, I have been working with the party to develop their current platform to include strong, evidence-based proposals, including expansion of safe supply for not only increased access across the province, but also a wider selection of choices of drugs and how people get them; decriminalization by getting a federal exemption the Controlled Drugs and Substances Act and reforms to the Police Act; and fully funding the Ministry of Mental Health and Addictions, which is vastly underfunded for dealing with the overdose crisis. One notable action that the Green party has taken with respect to drug policy was to not support Bill-22, which would have led to the involuntary confinement and treatment of young people with problematic substance use. This bill was opposed by First Nations, who saw clearly that the impact of this law would disproportionately affect indigenous young people. The BC Greens were right to stop this bill, but – if given a majority government – it is likely that the NDP will resurrect this bad legislation without anyone to stop it.

DML: Is there room on the platform, in your messaging or in your activities once elected for reform of the laws surrounding cannabis growing, selling and use in BC? Is there any possibility of reform of industrial hemp regulations?

Bernstein: As industries with the potential to support sustainable economic development in BC, the cannabis and hemp markets are very important to me. In creating a newly legal industry around non-medical cannabis, we have the opportunity to remedy the harms of prohibition and shape a market that supports equity and social justice. Sadly, the model put in place by the federal and BC governments ignored many of the recommendations of experts around creating such a system. We need to loosen restrictions in order to create a system that allows craft growers more access to the market and allow sensible marketing of cannabis to compete with the entrenched alcohol industry so that people can choose a safer drug to consume. We need to fight to remove alternative criminal penalties that accompanied legal regulation for those operating outside of the legal market. Instead, I advocate for incentives to attract consumers to the legal market, such as price reforms and space for better quality products with less packaging.

The lack of support for industrial hemp is, at present, a lost opportunity to support a renewable, sustainable, and economical industry that could help to transition us away from fossil fuels and the use of other non-renewable or environmentally harmful products such as cotton. If elected, I would support an in-depth review of our provincial cannabis and hemp policies towards creating ones that are evidence-based and better support these industries in BC. We need to reform these policies. I will continue to work with the BC Green party to take on these policy positions and will, myself, advocate for them during this campaign when I have the opportunity.

DML: How can people become involved with your campaign if they want to assist you in getting elected, aside from voting and encouraging their friends to vote Green?

Bernstein: I am running a largely digital campaign with a very small staff (me) and a few volunteers. I am definitely the underdog in this riding, but need everyone to encourage their friends and family to vote Green in order to help us stake out the position of evidence-based policies in the province. I would appreciate help in amplifying the social and traditional media that my campaign is producing. As a whole, we need to elevate drug policy and the overdose crisis as an issue that needs awareness and one in which the NDP has not done very well on.

If people are interested in volunteering or donating to the campaign, they can do that here.