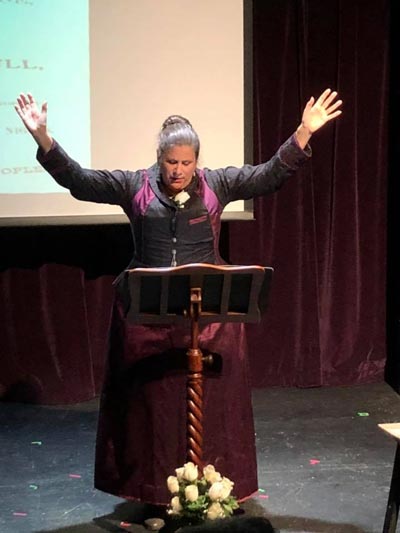 (CAPE MAY, NJ) — The Equity professional East Lynne Theater Company presents “The Woodhull Project” to celebrate the 100th Anniversary of the 19th Amendment. Written and performed by Emma Palzere-Rae, this one-woman play was directed by Albert Cremin, and Carin Jennie Estey is the production stage manager. “The Woodhull Project” premieres on ELTC’s channel on Saturday, September 26 at 8:00 PM (EST), and will be available through Tuesday, September 29 at 7:59 PM (EST). It is being offered for free, but donations are gratefully accepted.

“The Woodhull Project” explores the life of Victoria Woodhull, the woman who ran for President of the United States in 1872, through a contemporary lens. Woodhull appears today wondering if she has left any legacy. Flashbacks of her life, coupled with her commentary, explore how we can make a better world. What would she think about the state of women’s rights and social issues today? ​Tune into ELTC’s YouTube Channel to find out.

Raised in Ohio, and brought up in poverty, Victoria Woodhull and her sister Tennessee moved to New York City in 1870. During the six years there, they became the first women to run a stock brokerage on Wall Street and have their own newspaper. In addition, Victoria became the first woman to address Congress, and the first person to be arrested under the Comstock law. She ran for President of the United States, three times.

Most recently for ELTC, Emma Palzere-Rae played Mrs. Miller in “Ah, Wilderness!” She has performed in other regional, stock and off-Broadway theaters, as well as in film, television and radio. She founded Be Well Productions in 1989, touring several critically acclaimed one-woman plays on characters as diverse as Harriet Beecher Stowe, Emily Dickinson and Gilda Radner. In 1990, she banded together with other female solo artists to create New York City’s “Womenkind Festival.” Recent productions include “Agnes of God” at Madison Lyric Stage and “Doubt” at Emerson Theater Collaborative. Currently, she is the Associate Director at Artreach, Inc. (Norwich, CT) which provides arts programs to adults living with mental illnesses. A graduate of Emerson College, Emma is an active member of Actors’ Equity, and the Dramatists Guild, where she serves as the regional representative for New England – West.

The article continues after this ad

ELTC is still producing “Poe by Candlelight” on Saturday, October 24, but moved this popular event from inside the Cape May Presbyterian Church, to outside, behind Borough Hall in West Cape May, 732 Broadway. This is where the Farmers’ Market takes place during the summers, and there is plenty of parking. Tickets are $12, with $2 from each ticket going to the West Cape May Christmas Parade 2021, and must be purchased in advance since seats will be socially distanced: https://eastlynnetheatercompany.ticketleap.com/poe-by-candlelight/.

Virtual events continue, including a fully-staged Equity production of “Nothing Matters,” running four evenings a week from October 14 – November 21 on ELTC’s YouTube Channel for $15.

Visit www.eastlynnetheater.org, for updates on ELTC’s 40th Season, both live and virtual.

ELTC’s productions would not be possible without the support of season sponsors Curran Wealth Management, La Mer Beachfront Resort, The Washington Inn, The Henry Sawyer Inn, and Fins Bar and Grille, plus funding from the New Jersey State Council on the Arts, and contributions from many other businesses and friends.