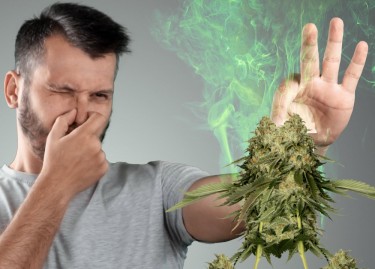 I’ve been covering the happenings of my Balcony Bud – which was harvested on the 15th of January. I believe, from this one plant, there should be about 1-1/2 ounces of primo bud after the curing process concludes.

Right now, I’m still in the drying part of the harvest, and with this phase I was inspired to write this article. Why? Because my office – where the bud is currently being cured – smells like a bag of dank assed-weed. If I keep the door closed, it simply accumulates within the space and then when I open it – dankness spills into the hallways and in some cases –I can even smell it in the streets.

Of course, I’m a sort of a ‘weed-bloodhound’ and can smell weed from blocks away – but the fact that one plant can produce such a stink warrants an article about “odor control”.

Today – we’re going to be looking at a few options you can implement to keep the smell down during the “stankiest” portion of a cannabis grow – Drying and Curing.

Why keep the smell to a minimum?

Secondly, the assumption I have writing this article is that you – the reader – is probably a small-time hobbiest of sorts. If you’re looking to reduce the smell and you’re a commercial grower – the answer is simple…CARBON FILTERS!

In fact, in a way that will be the same advice I give to the average home-grower as well, but today we’ll also be addressing alternatives to those who think that dishing out $70-$100 is a bit too much for their wallets so late into the growing stage.

Of course – having people steal your weed is just one reason you’ll want to keep the smell to a minimum – you also don’t want neighbors calling the cops on you thinking that “some cartel moved in”.

Carbon Filter is the primary choice

No matter how hard you look, the best option – which is also not that expensive – is getting a carbon filter. The way you’ll go about this is simply by placing the carbon filter in the extractor duct of your grow operation.

However, even when you don’t have a designated space for drying or curing – you can create a makeshift drying chamber which I will explain in the next section.

With this makeshift drying center – you can run an extractor fan which will help circulate the air [preventing mold] and get rid of the stank.

This of course will cost you money – but when it comes to reducing the smell, this is the best tip there is.

I don’t have money – now what?

Okay – let’s say you don’t have the cash to make a filter. Another trick is to make a “makeshift” dryer box. I used a cardboard box, poked some holes in it for air circulation, covered it with a towel and my house still smelled like weed.

What most other growers advise is that you make a box, and then simply make the extractor fan run from the set up.

The idea here is to simply have a few strings span across the inside of the make shift dryer. Then, you’ll want to make sure that it’s somewhat air-tight with a space for a duct or tube to run out from.

On the extreme end of this tube, you’ll place an extractor fan. This could be something as simple as an old computer fan or something similar. You’ll want to position the fan to “blow out” from the box.

Finally, you’ll want to run the extractor tube through some mothballs, which will diminish the smell. You can even put some aromatic essences on the mothballs to ensure that the smell is altered.

However – it will still smell like weed unless you invest into some carbon. You could potentially interlace the mothballs with some activated carbon to help reduce the smell.

Another way to go about it is to cure outdoors. This of course makes the stash vulnerable to weed thieves – but one way to reduce the smell is by removing the room – where the gasses can accumulate, creating the pungent odor.

Conversely, outdoors you’ll have more space which means less build up – except you open yourself up to a host of other potential issues such as bugs and other pests.

Growing aromatic plants outside your home is also advisable.
Look for herbs like Mint or flowers like Jasmine that has a pungent odor by itself to help mask the smell. Plant the aromatic flowers/herbs all around your property.

I personally love the smell of curing weed – but maybe you need to keep it on the down-lo. Let’s hope this article inspired you to bring down the smell. 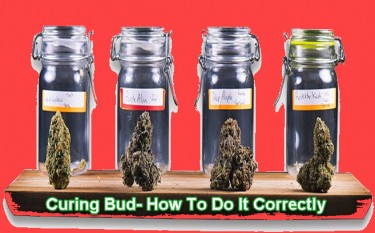 A GUIDE TO CURING AND DRYING YOUR WEED CORRECTLY!

HOW CURING AND DRYING YOUR CANNABIS AFFECTS THE AROMA! 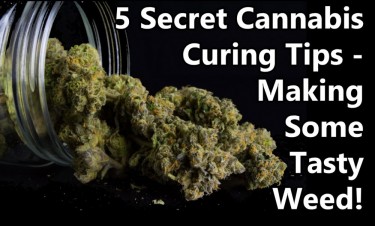 5 TIPS FOR CURING YOUR CANNABIS BUDS INTO TASTY WEED!