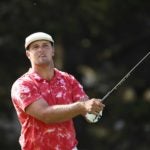 Bryson DeChambeau during the second round of the 102nd PGA Championship.

The Legend of Bryson DeChambeau seems to grow by the minute. Or at the very least by the hour. If you’re a golf fan, you best not turn your back too long on the networks’ coverage of the strapping seventh-ranked golfer in the world, or you’re liable to miss some must-see/listen TV. Fire ants here, a snapped driver shaft there. The pace is dizzying.

On ESPN+’s early coverage from the second round of the 102nd PGA Championship, announcer Bob Wischusen spilled another nugget of Bryson gold. As DeChambeau was lining up a putt on the 15th green, Wischusen recounted an anecdote from earlier in the week. Wischusen said that as DeChambeau and his caddie, Tim Tucker, were playing the 401-yard par-4 15th hole during a practice round, they approached Wischusen, mistaking him for a rules official.

“They walked over to me and said, ‘Is the compound beyond the bunker out of bounds, or a temporary obstruction?’” Wischusen said on the air.

“Just hit it 360 and you’ll be fine,” Wischusen replied, jokingly.

At this point, another ESPN announcer, Billy Kratzert, jumped in.

“Sadly, I can understand the question to you,” Kratzert said, alluding to DeChambeau’s unthinkably long drives.

Alas, in the first two rounds at Harding Park, DeChambeau has gone easy on the 15th, taking a conservative approach. On Thursday, he hit his tee shot only 273 yards, into the right rough, and made bogey. On Friday, he was shorter still, knocking his drive a mere 271, this time into the left rough, resulting in yet another bogey.

This weekend could be fun.

As GOLF.com’s executive editor, Bastable is responsible for the editorial direction and voice of one of the game’s most respected and highly trafficked news and service sites. He wears many hats — editing, writing, ideating, developing, daydreaming of one day breaking 80 — and feels privileged to work with such an insanely talented and hardworking group of writers, editors and producers. Before grabbing the reins at GOLF.com, he was the features editor at GOLF Magazine. A graduate of the University of Richmond and the Columbia School of Journalism, he lives in New Jersey with his wife and foursome of kids.