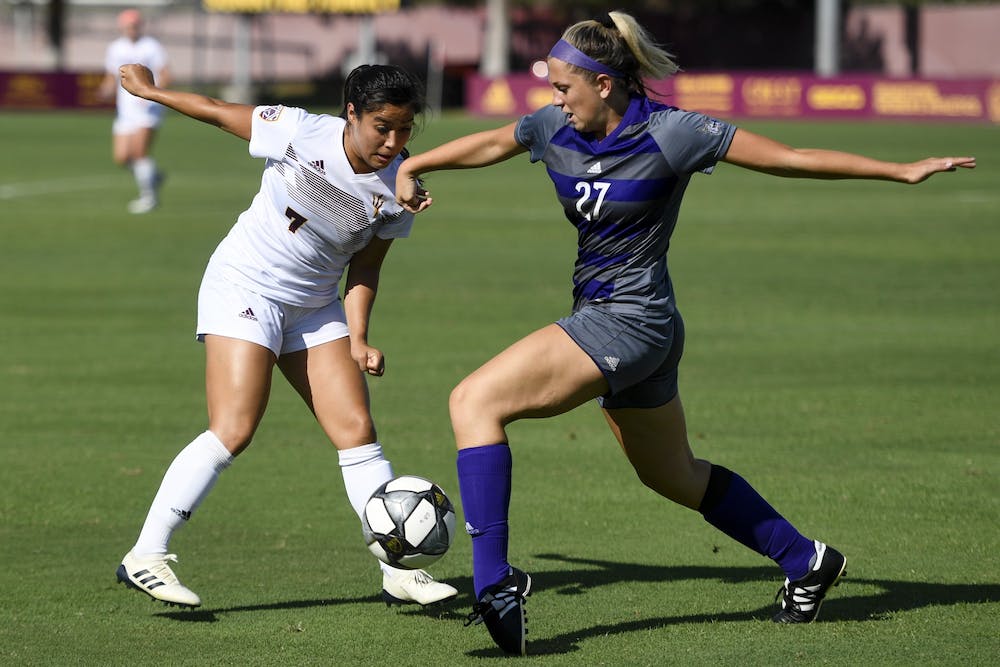 Last summer, ASU’s soccer team took a trip to Mexico to play against a few of the teams in Liga MX Femenil. Adriana Orozco, a midfielder with the Sun Devils at the time, went on the trip before she graduated in 2019.

After a long process to obtain dual citizenship, Orozco signed with the team in late July.

Orozco’s journey from ASU to professional soccer isn’t the only one. Former Sun Devils are signing professional contracts in England, Hungary, Italy and the National Women’s Soccer League.

“My experience at ASU was nothing but amazing,” Orozco said. “I have everything to thank them for, especially for being here in Mexico playing.”

By receiving her dual citizenship, Orozco has the option to play for the Mexican national team or the United States national team. Now, Orozco awaits her debut with hopes of playing in a World Cup one day, her “ultimate goal and dream.”

“That is one of the main reason(s) I came to the league, to get more exposure and hopefully make it to the national team and be able to play in a World Cup,” Orozco said.

The ASU soccer team’s staff has grown aware of the different styles of play between the collegiate and professional game and have used that to prepare its players better.

“I feel our style of play prepares players better for the professionals because we are possession-oriented, which is something that happens a lot more in the pros,” ASU head coach Graham Winkworth said.

Winkworth noted that when playing against stronger teams like Stanford, he still only utilizes 16 players out of the 30 he has on the roster. On any given day, Winkworth substitutes four or five players, closer to the standards of professional leagues like the NWSL.

Along with implementing professional standards, ASU’s coaching staff is loaded with international experience, having contacts with clubs, agents and coaches all around the world.

Assistant coach Shigeyoshi “Sugar” Shinohara started his coaching career in Yamaguchi, Japan. The Sun Devils also have international players, like Delgado, who have contacts from their own countries.

“We utilize those contacts towards the end of a player’s college career and we help them find a suitable home based on their level,” said Winkworth.

“My goal is to get to the full national team. Right now, I am on the U-23’s and I hope to get to that goal and be selected,” said junior midfielder Eva Van Deursen, who came to ASU from the Netherlands.

When players are called up to their national teams, they may miss important collegiate matches.

Despite this, the team encourages its players to go and represent their countries. Winkworth believes national duty is important for players’ development.

“The coaches and the players know my dreams and aspirations, becoming a professional, they push me every day to get better and it’s starting to show,” junior forward Nicole Douglas said.

The coaching staff is devoted to providing each player with the necessary feedback after practices and games. Douglas said every piece of feedback is beneficial even when it isn’t positive.

“Douglas knows if she’s playing in a certain position, these are her goals,” Winkworth said. “So, for her, that would be to make a number of shots from a certain part of the pitch.”

ASU’s players have individual goals to reach during the games, with their coaches using a program to analyze each match afterward.

The program tells the players’ statistics, such as how many passes forward they made, how many tackles that player won and other key numbers regarding their performance. These statistics help Sun Devil players make precise goals for the next game and beyond.

“Those small goals every game keep me really sharp, and it really makes me want to improve myself,” Van Deursen said.

Jemma Purfield in England, Angela Boyle in Italy and Natalie Stephens in Hungary are just a handful of byproducts of ASU’s development of future professionals.

In this regard, the Sun Devil soccer team is on an upward curve.

“It’s very exciting when they are proud to be Sun Devils and representing us while they are playing professionally,” Winkworth said.