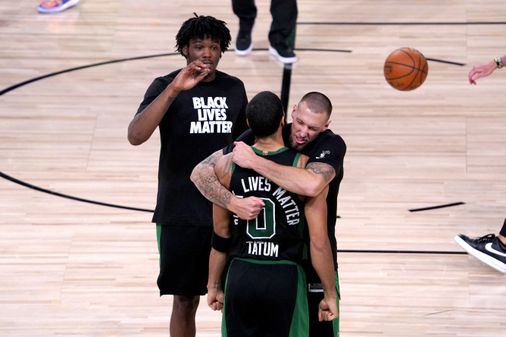 A conference semifinals series — or even a conference finals series like the one that the Celtics commence vs. the Miami Heat Tuesday night — doesn’t make much of an imprint in the history of a franchise that has hoarded 17 championship banners.

Still, the Celtics’ seven-game victory over the defending champion Raptors in the semifinals felt awfully close to a seismic event. These young Celtics had to fight and claw and grapple for what they wanted, and a year after certain members of last year’s team went into Operation Shutdown against the Bucks, they proved that poise and unity accompanied their talent. It was incredibly fulfilling to witness if you care about this team.

I haven’t been able to stop thinking about it since, even as the next round and an outstanding Heat team await.

So, just for the fun of it as we look back and look ahead, here are a few thoughts on a dozen Celtics as they take the next step in their pursuit of Banner 18.

Jayson Tatum: It didn’t come as a surprise, per se, because we knew he had it him. Heck, he came through in huge moments as a rookie two years ago. Still, it was breathtaking to watch Tatum’s performance in Game 7 against Toronto and recognize in real time that we were watching a young superstar who now had the awareness of how and where to best deploy his considerable powers. He dropped a 29-point/12-rebound/7-assist line in a game in which every inch of progress on the court had to be earned and the Raptors were relentless in trying to stop him (most notably by constantly sending a guard to attack his dribble). And Tatum’s plastic-man defense gets overlooked because of his offensive prowess. Jimmy Butler is an excellent player who must be reckoned with. But the Heat don’t have anyone as good as Tatum.

Jaylen Brown: There’s so much that’s impressive about the fourth-year Celtic, on the court and off. He just keeps getting better at everything on the court, exponentially, and has emerged as one of the more thoughtful voices on social matters in the league if not all of sports. But what doesn’t get enough notices is his mental toughness. Brown had a dismal Game 4, shooting just 4 for 18, including 2 of 11 from 3 in the Celtics’ loss. How did he respond? Oh, he merely averaged 26.3 points, 10 rebounds, and 3 steals over the final three games of the series. He’s not afraid of anything.

Kemba Walker: I have to say, the gripes about Walker during his struggles late in the Raptors series got to be a bit much. OK, a lot much. It became too easy for some fans to forget that he had delivered exceptional moments previously in the playoffs (he averaged 24.3 ppg in the sweep of the Sixers, had 18 points and 10 assists in the opening win against the Raptors, and scored 29 points and made a dazzling dish to Daniel Theis for what could have been the winning basket in Game 3). More important, he didn’t quit on himself or his teammates in tough times, as a certain predecessor did last year, when the Celtics season ended at least one round earlier than this one.

Marcus Smart: You’d think one of the behind-the-scenes wizards in the front office would be working on a way to clone him so there would be multiple Marcuses to torment Jimmy Butler, Tyler Herro, and Duncan Robinson all at the same time. The lone Marcus will probably find a way to do that anyway. It was sweet justice that he made the game-altering defensive play in Game 7. If he isn’t one of your all-time favorite Celtics by now, I’m curious. When did you stop paying attention?

Daniel Theis: He might be the NBA’s most underrated player at this point, especially by the officials, who blow a whistle every time he twitches in the vicinity of an opponent. His leap forward in the post-Al Horford/Aron Baynes era is a big reason the Celtics are where they are. He averaged just 6 minutes per game and 1.7 points in last year’s playoffs.

Gordon Hayward: He’s the wild card in all of this, isn’t he? He was playing arguably his best ball as a Celtic when he rolled his ankle in Game 1 against the Sixers, and he’s been excellent against the Heat this year, averaging 22 points, 8 rebounds, and 2 assists against them in a pair of games. Even when Hayward isn’t at his best, his all-around offensive game, selflessness, and court vision make him a valuable asset on offense. It’s uncertain when he’ll be back in this series, and we must assume there will be some combination of rust and tentativeness to shake off. But Hayward at, oh, 80 percent is still an important player, and perhaps even a difference-maker in this evenly matched series.

Robert Williams: His helpful performance — doesn’t it seem like he catches three Smart lobs for dunks every game? — in meaningful minutes against the Raptors has to be considered nothing less than a breakthrough. But he also reminded us from time to time why the opportunity didn’t come sooner – he’s too often late closing on shooters, which isn’t going to cut it against Miami. And please, Sir Time Lord, do not bite for that Kelly Olynyk upfake. OK, you can bite once. But that’s it.

Grant Williams: Yeah, Tatum bailed him out in Game 7 after he missed a pair of late free throws. That’s what superstars do for rookies. But he was exceptional on defense in the final minutes, and it’s a tribute to the intelligence and maturity of the 22d pick in the last draft that he was trusted in those moments. He’ll make the free throws next time, too. He learns.

Brad Wanamaker: I’ve really come to appreciate his smart, savvy game, and hope he ends up with the security of a multi-year contract somewhere if he’s not back with the Celtics next year. He’s a better shooter than he gets credit for (36.3 percent from 3-point range), probably because when he misses, they tend to miss by a lot.

Romeo Langford: He has a chance to be a high-quality player for a long time, providing he puts in the necessary work on the shot. But it’s OK to wonder, too: Would Tyler Herro have emerged with the Celtics, who reportedly coveted him, as he has with the Heat had he gotten past Miami at No. 13 in the last draft? He’s really good.

Semi Ojeleye: If only there was a way to play him strictly on defense …